Home
Technology
How to Use Discord Quote Feature [Mobile+Desktop]

Millions of video game players use Discord for communicating with fellow gamers worldwide. It was launched in 2015 by Jason Citron, founder of Discord and a similar social gaming technology named OpenFeint. Ever since its launch, Discord has been a go-to platform for millions of gamers. They share their favorite games, ideas, interests, and memes (of course) to build communities based on mutual interests. Since it is a chatting application, it offers numerous features available in similar applications. Users can write text in simple, bold, italics, or underlined format. However, one feature that is common in other applications was lacking in Discord. Previously, users had difficulty quoting others on this platform. But with a 2020-update, users can now easily use the Discord quote feature to quote others.

In this article, we will share how users can quote others on desktop as well as mobile applications using a straightforward method. Moreover, if you use Discord on Xbox, this method will work for you, too. So, if you are a regular Discord user who wants to quote, keep reading!

How to Add a Discord Quote

Quoting other users is a common feature across all texting and chatting platforms, especially WhatsApp, Messenger, etc. Instagram recently got an update including this feature in its Direct Messages. Previously, Discord did not have a straightforward way of quoting other users. Users had to use code blocks or sophisticated chatbots. However, this is not the case ever since the 2020 update arrived. Now, users can easily add a Discord quote on their mobile or desktop application.

Generally, the quoting techniques are the same across all platforms, except for multi-line quoting. It works differently on mobile and desktop.

Below, we have shared a quick and easy tutorial for adding a single as well as multi-line quote on Discord mobile and desktop.

Single-line quotes are statements that take only one line to complete. There are no line breaks between them, and users do not tap the Space Bar (on desktop) or Return Key (on mobile).

The method for adding a single-line Discord quote is almost the same on mobile and desktop applications.

To add a single-line quote on Discord, type the > symbol on your keyboard/keypad, immediately followed by a single space. After space, add your quote.

Note: In the desktop application, as soon as you press the Space Bar after the > symbol, it will convert into the vertical line. The screenshot shared below does not have space after the > sign to show users how it will appear before pressing the Space Bar.

On the desktop application, it should look like this: 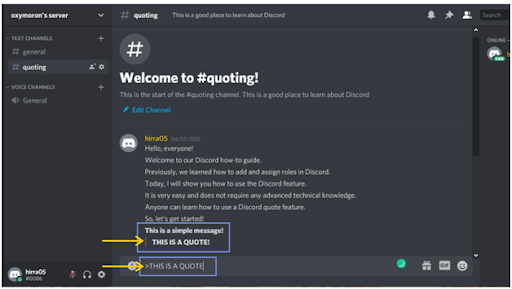 On the mobile application, it should look like this: 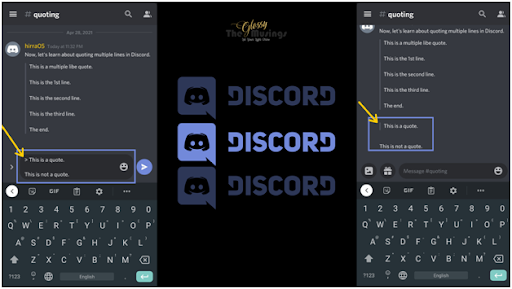 Unlike a single-line Discord quote, adding multi-line quotes in a desktop application is different from a mobile app.

There are two methods for adding multi-line quotes on Discord.

The first method involves using the > symbol before starting every new paragraph quote. However, this method is not time-efficient.

Generally, users prefer the second method because it’s easier. In this method, type the >>> symbol on your keyboard/keypad, followed by a space. Add your quote after space. After this, whatever you type will become one multi-line quote.

Note: In the desktop application, as soon as you press the Space Bar after the >>> symbol, it will convert into the vertical line. The screenshot shared below does not have space after the >>> sign to show users how it will appear before pressing the Space Bar. 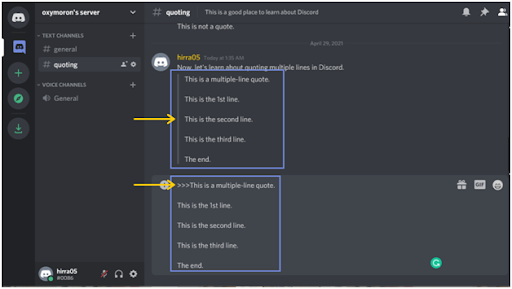 Unlike the mobile app, > and >>> work the same on the desktop application. It means users can easily quote multiple lines by using >.

Multi-line quoting will look like this one a mobile app: 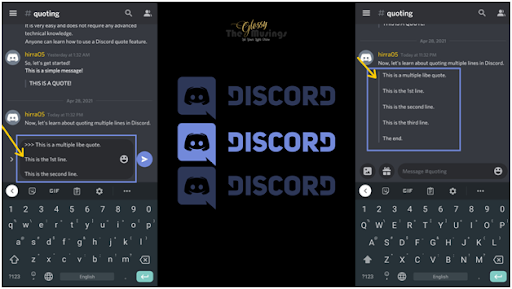 Using the Discord quote feature is extremely easy once you learn how to use it. It does not take long to learn using this efficient yet straightforward feature to use on Discord. All users on your Discord server can use single and multiple line quotes. After you know how to add roles in Discord, you can show everyone how to use the quoting feature and enjoy quoting each other on your channel. 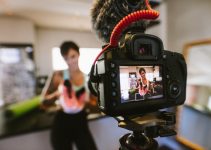 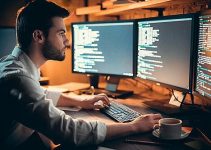 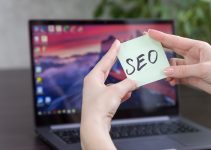